In a conference call with a friend and business partner, I had one of those “Eureka” moments this week as we were discussing friendships we shared. Several times when names were raised, I responded—“Yes, I am friends with him/her.”

And very often, I also had to confess that I had never met some of the people we were discussing. Instead, our relationships had been born, nurtured, and developed online.

Eureka. I don’t have just a few friends I’ve never physically met, but many. Which raises a question about just what “friendship” is, and whether or not our virtual friends are “friends” in the classic sense. The question is hardly academic, as many congregations I work with retain a cautious approach to social media because, in part, they will not, or cannot, accept that online relationships are “real.”

But a thinker from my academic past can, I believe, ease that concern for many, while helping others understand just how profound social media friendships are.

My academic days are well behind me, but not the information I learned. So it shouldn’t surprise anyone that my Eureka moment is rooted in the words of a medieval theologian who knew a thing or two about friendship—Peter Abelard.

Best known for his love affair with Heloise, Abelard was also a student of what it was to truly love God—a love that he believed had a counterpart in this life; charity. His ideas about what charity and love of God really are were heavily influenced by the works of Cicero. In fact, Abelard’s definition of what it is to love God comes directly from Cicero’s definition of friendship (amicitia, for you Latin lovers). But it’s how Abelard altered the understanding of charity that most interests us here.

Cicero, you see, stated that friendship was a reciprocal relationship—you act on behalf of one because you want the best for him or her, and because you expect similar actions in return.

Abelard stressed only the first idea. That you care for the fate of your friend, with no concern for reciprocity.

It is a genuinely selfless gift. One gives, and expects nothing in return.

A selflessness that Abelard knew a great deal about personally, if you know about his tragic relationship with Heloise—a woman he loved, bore a child with, and suffered mutilation because of. After moving to a monastery, he never saw Heloise again, though he retained a deep, abiding friendship with her using 12th century social media—letters.

Abelard’s understanding of charity (and friendship, in his later letters), could well be used to define online friendships that we develop today. We meet many people online with whom we develop genuine, deeply felt, and life-changing relationships, though we may never personally meet. (On the other side, I find that these relationships increase the chance for meeting—at conferences, when I travel, etc.—and to date I have rarely been disappointed when we met face-to-face.) These relationships can be genuine, deeply felt, and important when they are developed in the contest of friendship as Peter understood it. Doing well for people because you want the best for them … not looking for or expecting something in return.

In fact, this is how many of my own online friendships have begun. People post tweets, Facebook posts, etc., that express a need. And I (and many others) respond to that need because we genuinely enjoy sharing useful information.

This is not to say this is the only use for social media—marketers, for example, see in social media a one-way relationship going the other way. They sweep the landscape looking for clients.

This is fine, too, but it is not how communities engaging in social media get the most from it. Rather, it’s that shared experience of helping one another that creates dynamic, and powerful, communities of people who often have never met one another personally.

But they are, indeed, friends.

There’s a great deal of information available to churches and businesses about how to “inventory” and assess your social media program. Many of these inventories are quite good; done properly, they’re also time-consuming and best done with the assistance of someone who specializes in this world.

Should you go to that extent? Take the time to fully account for all your social media projects, assess their effectiveness, and analyze how you manage your channels?

Question 1: Looking at your existing social media channels, are you following everyone (or as many as you are able) of your congregation?

Why It Matters: Social media is just that–social. If you are not following your parishoners, you are using social media channels as a one-way street. You can send out information that you find important, but you aren’t seeing information about your community that your members find important.

Question 2: Thinking about your online habits, are your church’s social media channels integrated into your work (i.e., they stay on and you check them at the same rate you check e-mail)?

Question 3: Do you regularly review and make adjustments in your social media habits based on your parishoners’ responses and posts?

Why It Matters: Think about real-time, face-to-face conversations. When you start talking with someone, you use your aural and visual senses to decide how the conversation will develop. If the person you’re speaking with is using sober tones and looking down, you aren’t likely to start talking about how wonderful everything is in your life. Instead, you listen and sympathize more. If someone is excited, you don’t burden them with a heavy question. The same is true of social media. Sending out material that no one responds to and never changing suggests to those who follow you that you’re tone deaf. Staying on top of people’s reaction is critical to your success.

If you answer positively to all three questions, you’re set for a full-blown social media inventory. Forge ahead!

Less than that, there are some more fundamental steps you need to take before investing in an inventory. Start with the questions you can’t answer affirmatively, try doing them for a couple months, and then re-evaluate your readiness for an inventory.

Martin Davis is founder of Sacred Language Communications and specializes in helping congregations and faith-based organizations leverage social media to strengthen their communities through improved mutual understanding and discussion. Contact him at mdavis@sacredlanguagecommunications, or call him at 540-498-5994. 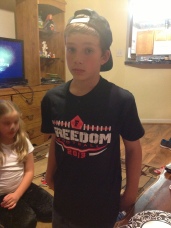 Most just enjoy and benefit from the game.

This past Monday night, more than ten times that number entered the weight room at Riverbend High School to take their first steps toward playing high school football–my son (right) among their numbers–with promises of nothing more than sweat, pain, and two-a-day drills in 100 degree heat in August. 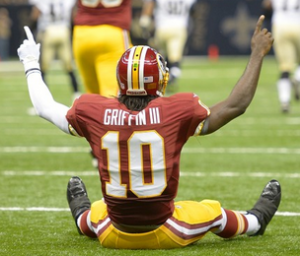 Some guys strike it rich

The paradox between the two worlds raises a question–if the young men beginning their high school careers never make millions in the NFL draft, will the next four years of their lives be wasted? High school football, after all, is no small commitment. Practice/weight training are year-long at this level. Figure a minimum of 10 hours a week (and that’s a low number by any estimate), and these young players are on a track to commit 2080 hours over the next four years to a sport that the vast majority will never play after high school.

Most any high school football player will tell you no–these years are not wasted. In fact, most look back fondly on these years for the rest of their lives.

Carry that lesson to your church’s social media use. A very few communities will realize users in the tens of thousands. (Willow Creek’s Facebook page has 27,500 likes, Saddleback has 92,000 likes, and Adam Hamilton of Resurrection Church of Leawood has 25,500 likes). The vast majority will never crest 200.

Are those using social media and not reaching these relatively large numbers wasting their time?

The name of the game in social media is not high numbers of likes or follows. Social media is not, by its nature, a “church-growth” tool. It is a tool for facilitating discussion and communications among people who live in community.

A recent Pew study drives this point home. According to the study, “users say they … appreciate photos and videos from friends … the ability to share with many people at once. … keeping up with news, or receiving support from the people in one’s network–appeal to a more modest audience of users.”

Did you catch it? It’s sharing information, sharing with friends, and not so much getting news, that drives users on Facebook?

It’s not about the numbers. Consider how small the average number of friends Facebook users have:

So when thinking about your social media “strategy”, remember those guys sweating in the weight rooms this summer to make their high school teams. Maybe 20 of the tens of thousands of high school football players will rise one day to the top and claim millions. Most never will; yet, they’re forever changed for the better by taking part.

It’s about the journey and connections–not the numbers.